Donald Ross was born in the small Scottish seaside town of Dornoch in the northern part of the country. He grew up playing the game at Royal Dornoch Golf Club. This club ranks as the 4th best golf course in Golf Digest’s: Top 100 Courses Outside the US for 2020-21.

Ross completed his formal education at the age of 14 to work as an apprentice. His early role included making sand boxes for the Dornoch Golf Club. The club did not receive its Royal title until 1906. In 1893, he spent a year at St. Andrews under the guidance of ‘Old’ Tom Morris. Here he learned the intricacies of running a golf course and the craft of club making. He returned home to Dornoch the following year, now in charge of ‘maintaining the grounds’ and head club maker.

Ross received his big break to move to the ‘new land’ in 1899. American professor, Robert Wheeler Wilson requested he travel across the Atlantic to help spread the gospel of golf. When he arrived in America, he began to build and run the Oakley Golf Club in Boston, Massachusetts. The following year, the Tuft family requested his help with the Pinehurst Golf Resort. The family had recently taken ownership of the property in North Carolina.

Ross remained at the Oakley Golf Club in Boston for eleven years. Yet, the course with which he would become synonymous was taking shape in the Carolinas. By 1907, the famous Pinehurst #2 layout was fully operational, though with sand greens. Bermuda grass greens were not installed until the early 1930’s – ahead of the 1936 PGA Championship.

By the time he departed from his role at Oakley Golf Club to take a position at Essex Country Club in the northeast of Boston, his design career was beginning to flourish. Over the next several decades he would tally a total of 413 golf course builds and renovation projects. Of these projects, he never saw ⅓ of them, and another ⅓ he only visited once or twice. He completed the vast majority of his work from his home office at Pinehurst. Travel in those days was restrictive and could prove difficult, making multiple site visits a rarity.

There are certain characteristics which signify a Donald Ross layout. Like Dr. Alister MacKenzie, he was masterful at creating tightly routed courses. These courses had little distance between a green and the next teeing ground. He varied his green complexes, with his most notable being the ‘turtleback’ greens seen at Pinehurst #2. Ross would feature treacherous double plateau greens, sunken ‘punch bowls’, and the occasional ‘volcano’ green perched high above the approach.

Ross relished the opportunity to challenge a golfer’s shot making ability. He often created ‘switchbacks’. A ‘switchback’ requires the golfer to shape the ball one way from the tee and the opposite into the green. He used diagonal hazards to punish a poorly hit tee shot, placing cross bunkers only a short distance from the tee, doing the same as the golfer approached a green around 50 yards from the front edge.

Ross passed away in 1948 at the age of 75. He was designing the Raleigh Country Club at the time of his death. He was inducted into the World Golf Hall of Fame in 1977. This is one of golf’s highest honors. The world will remember him as one of the architects from golf design’s ‘Golden Age’. 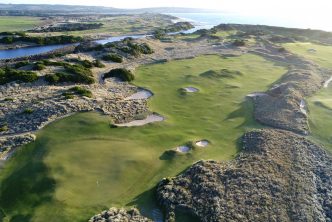 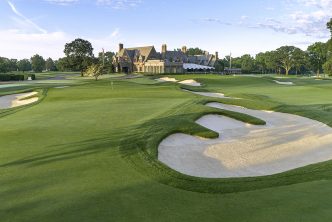 Written by Brad Smith
Jones Family Legacy
Coore & Crenshaw: Golf Course Design Legends
Manage Cookie Consent
To provide the best experiences, we use technologies like cookies to store and/or access device information. Consenting to these technologies will allow us to process data such as browsing behavior or unique IDs on this site. Not consenting or withdrawing consent, may adversely affect certain features and functions.
Manage options Manage services Manage vendors Read more about these purposes
View preferences
{title} {title} {title}