Perspective of a Professional Golfer.

Have you ever considered what is inside the mind of the greatest golfers? Yes they have the talent we all desire but it’s how they think and see the golf course which separates them from us.

The journey and process to compete at the highest level began far earlier than when I turned professional in 2008. As a junior I struggled with self belief, never really knowing if I would ever be good enough. I began playing golf at the end of 1996, the dawn of Tiger Woods. I was able to watch him grow as a player, allowing me to develop shot making and creativity learned from books and articles about Tiger’s thought process and shot selection. Negatively, I would make self comparisons to his mental toughness, I had a lot to learn. Here are three important lessons inside the mind I learned, helping me become a better, more consistent golfer.

What You See…Is What You’ll Get

In golf, as with life, we focus on the negatives. Do you step on the tee looking for hazards and areas to avoid? Why? The intention is to hit the fairway or green right? Watch a professional golfer on TV, pay attention to the pre shot routine and you can almost see inside the mind. They’ll stand intently near the ball determining distance, weather, and club selection. Next they’ll take some practice swings, create a feel for the shot they are facing. Finally, they widen their gaze, removing all distractions or ‘mental chatter’ from their intention.

Aim small to miss small. As an example, if I was playing a gently shaping hole from right to left I wouldn’t just aim for the fairway at the corner, instead I would look for a spot in the fairway no more than 1-2 yards wide. Each look at the target forming an image in my ‘minds eye’. The next time you are on the driving range or golf course, pay attention to the image in your ‘mind’s eye’. Work on narrowing your target, aim small to miss small. My favorite book/audio tape for training your mind this way is ZEN Golf: Mastering the Mental Game by Dr. Joseph Parent (pictured). I used it throughout my career and benefited from it greatly!

It Is Just One Shot…Let It Go

Do you focus more on the bad shots than good? What are you talking about after the round? We recall poor shots because we feel a need to justify ourselves. Do you give much thought when you hit the fairway, hit the green on approach, and 2-putt for par? Probably not. However, a poor bogey, we’ll think about it all the way to the next tee.

As a young player my temper and insecurities severely hampered my ability to improve. These factors prevent many amateurs from maintaining lower handicaps, and countless professionals from progressing up the world rankings. I was unable to control my emotions as a result of immaturity. Ultimately, the only person who cares whether I hit a good or bad shot is myself, yet inside the mind I felt embarrassed causing outbursts of anger from emotions.

Give up control to gain control. This notion was instrumental for my progress. Turn anger and personal embarrassment into reflection. Why did I hit the poor shot to begin with? This reflective attitude allowed me to stay calm and analyze the situation, then move on. Try to give up control, accept that you will be OK, regardless of the result. Reflect on your shots, why was it good or why was it bad. This should help you keep control after a good hole or regain control faster after a poor hole. The only shot you can control is the next one, anything before or after that is irrelevant.

“He’s a great range player, but he can’t take it to the course”? Countless golfers have or could have had this label, myself included for a while. I struggled with this as a junior. Transitioning from the driving range to the golf course was difficult and I buried myself in instructional books. I had sound setup fundamentals learned from Woods and Nicklaus books, both regarded as having the soundest setup fundamentals of all time. However, there were always new swing thoughts to try, complicating the game further. Practice often felt easy because the result didn’t matter, inside the mind I had ‘given up control’, on the course was a different story.

Let’s step from the driving range to the golf course. Swing thoughts must be put into action, with trees, bunkers, or water in play, the brain a jumbled mess. I’m sure many of you can relate! A positive range to course transition happens inside the mind. It is time to see the field of play. Can you hit any target without seeing or visualizing it? Let’s focus on where we want the ball to end up. Target visualization increases your chances of hitting a good shot. After every shot, analyze what you did right or wrong. On the good shots reaffirm the thought process and commit to doing the same on the next one, but on a poor shot assess how and why the ball went where it did. Make a swing or rehearse what you intend to do next time and ‘Let it go’. 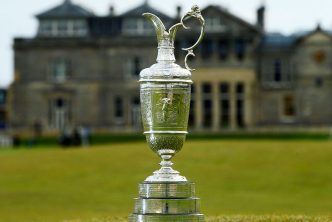 Written by Brad Smith
Thailand’s Luxury Golfing Destination
Tour Golf Monthly, PGA Tour
Manage Cookie Consent
To provide the best experiences, we use technologies like cookies to store and/or access device information. Consenting to these technologies will allow us to process data such as browsing behavior or unique IDs on this site. Not consenting or withdrawing consent, may adversely affect certain features and functions.
Manage options Manage services Manage vendors Read more about these purposes
View preferences
{title} {title} {title}